The project concerns the development and demonstration at sea of the Networked Ocean System, a networked vehicle system for persistent communications and data collection in remote oceanic areas.

The overall Networked Ocean System is scalable. The system addresses all the topics of the call for this type of projects by providing unique and cost effective capabilities for covering wide areas in the Atlantic, being available for long periods of time, providing timely, secure and reliable communications, collecting data from smart platforms or land-based stations, and disseminating data to land-based stations or smart platforms.

The novel capabilities for persistent communications and data collection in remote oceanic areas, which will be developed and demonstrated in this project, leverages the latest in robotic hardware and software and builds on experience in the design, construction, and operation of unmanned air, surface and underwater vehicles for innovative applications in Portugal and Norway. Vehicles and other systems are contributed by FEUP, Marinha Portuguesa, and AMOS-NTNU and FFI.

The following picture represents all the components of the Networked Ocean in action. 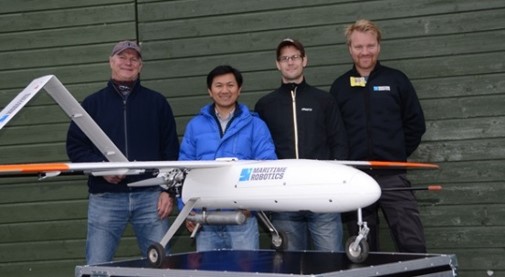 The software development for the project will be done with the FEUP-LSTS Neptus-IMC-Dune software tool chain. This is a software framework for mixed-initiative control (humans in the planning and control loops) of unmanned ocean and air vehicles operating in communications challenged environments with support for Disruptive Tolerant Networking (DTN) protocols. The unique features of the tool chain build on experience with the coordinated operation of heterogeneous vehicles. Neptus is a distributed command, control, communications and intelligence framework for operations with networked vehicles, systems, and human operators. Neptus supports all the phases of a mission life cycle: world representation; planning; simulation; and, execution and post-mission analysis . IMC is a communications protocol that defines a common control message set understood by all types of LSTS nodes (vehicles, consoles or sensors) in networked environments. This provides for standard coupling of heterogeneous components in terms of data interchange. DUNE is the system for vehicle on-board software. It is used to write generic embedded software at the heart of the vehicle, e.g. code for control, navigation, or to access sensors and actuators. It provides an operating-system and architecture independent C++ programming environment for writing efficient real-time reactive tasks in modular fashion. The tool chain has support for DTN protocols . LSTS researchers, cooperation with Kanna Rajan, have integrated the deliberative onboard planning system TREX  with Dune.

The Networked Ocean vehicles will run the IMC-Dune-TREX software. The control stations will run the Neptus command and control software with a TREX plug-in. The Networked Ocean System will use the IMC communications protocol. All nodes in the system talk IMC. This allows for inter-operability. NOS has support for inter-operability with other vehicle systems compliant with JAUS protocol. The underwater communications component is supported by the Janus protocol. All systems have support for disruptive tolerant networking (DTN). The NOS vehicles will have TREX-based deliberative planning capabilities for unattended operations in remote areas and smart cooperation.